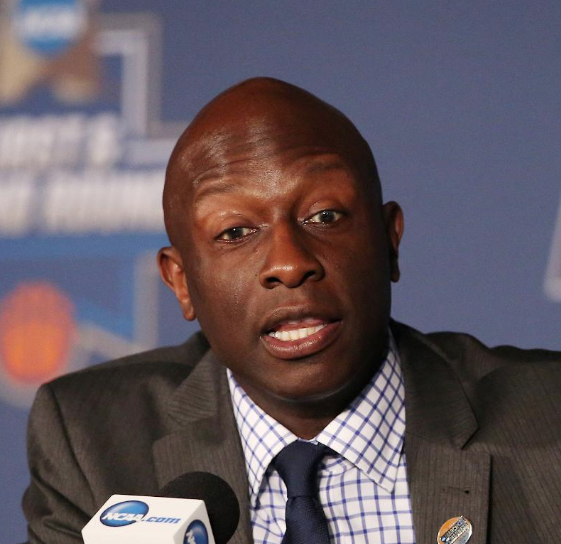 Jones, the 2019 recipient of the Ben Jobe Award as the top minority coach in Division I men's basketball, has presided over the most successful era in the long history of Yale Basketball. Over the last six seasons, Yale has a remarkable 63-21 Ivy record. During that stretch, the Bulldogs have won four league titles and earned three NCAA Tournament berths, including notching the first NCAA victory in school history.

Jones, who was inducted into New England Basketball Hall of Fame in 2015, is a three-time Ivy League Coach of the Year (2015, 2016, 2020) and also has been named the NABC District 13 Coach of the Year three times. He surpassed Hall of Fame Coach Joe Vancisin, who led Yale to 204 victories, as the winningest coach in school history when the Bulldogs beat Holy Cross on Mar. 22, 2014.

Jones has mentored numerous players who have gone on to play professionally, including Miye Oni, who in 2019 became the first Ivy Leaguer selected in the NBA draft since Penn’s Jerome Allen in 1995. Oni, the 2019 Ivy League Player of the Year, was picked in the second round with the 58th overall selection and is currently a member of the Utah Jazz.

In 2019-20, Jones led Yale to 23 victories, tying the 2015-16 team for the most in the modern era of Yale Basketball, and an Ivy League championship for the fourth time in the last six years. The Bulldogs were set to play in the NCAA Tournament for the second straight year before it was canceled due to the COVID-19 public health threat.

In 2018-19, Jones guided Yale to Ivy League regular season and tournament titles and a 22-8 overall record. The Bulldogs knocked off Harvard in a thrilling Ivy League Tournament championship game at Lee Amphitheater and then nearly upset third-seeded LSU in the NCAA Tournament. In addition to winning the Ben Jobe Award, Jones was a finalist for the Skip Prosser Man of the Year Award.

In 2015-16, Jones led the Bulldogs to the most successful season in school history. Yale won 23 games, the most since 1906-07, captured a second straight Ivy League title with a 13-1 record, matching the 1961-62 team for the best in school history, and advanced to the NCAA Tournament for the first time in 54 years where the Bulldogs upset Baylor to earn the first NCAA Tournament victory in Yale history.

Jones' success has not gone unnoticed nationally. In June of 2016, The National Association of Basketball Coaches selected him for an ad hoc committee on NCAA men's basketball tournament selection, seeding and bracketing, and in 2018, Jones was selected to coach the East Squad at the Reese's College All-Star game, which was played on Reese's Final Four Friday, at the Alamodome in San Antonio.

In 2014-15, Jones was named the league's Coach of the Year after guiding the Bulldogs to 22 wins and a share of the Ivy League championship. One of those victories came over defending national champion UConn, just the second time an Ivy League team knocked off a defending NCAA champion.

Jones also was selected as the NABC District 13 Coach of the Year, was a finalist for the Skip Prosser Man of the Year, Ben Jobe Award as top minority coach in Division I and the Hugh Durham Award as the national mid-major coach of the year.

Jones was named the CollegeSportsMadness.com Ivy League Coach of the Year in 2014 after guiding the Bulldogs to 19 wins and a second-place Ivy League finish. In addition, he was a finalist for the Ben Jobe Award.

In 2001-02, Jones led the Bulldogs to their first Ivy League title since 1962-63 and the first postseason tournament victory in the history of Yale basketball. The team won 21 games and reached the second round of the National Invitation Tournament. Jones’ success did not go unnoticed. He was named the Ivy League Coach of the Year by Basketball America and CollegeInsider.com. Following Yale’s weekend sweep of Penn and Princeton that season, Dick Vitale selected Jones as his Coach of the Week.

In addition to success on the court, Jones's players have shined off it as well. In 2014-15, Jones coached Matt Townsend ’15, who was selected as a Rhodes Scholar and was named the men’s basketball Academic All-American of the Year. In addition, Javier Duren ’15, who played professionally in Europe, was a candidate for the Allstate Good Works Team. In 2015-16, Justin Sears was a finalist for the national Senior CLASS Award, which focuses on the total student-athlete and encourages students to use their platform in athletics to make a positive impact as leaders in their communities. In 2019, Trey Phills was the male recipient of Yale’s Ford Student-Athlete Community Outreach Award, presented at the annual Senior Student-Athlete Reception during graduation weekend, and was named to the NABC 2019 Give Back Team, which recognized 10 men's student-athletes from across the nation for their outstanding community service efforts.

In addition, Yale has earned an NABC Team Academic Award in each of the last seven seasons.

Jones was named Yale’s 22nd head coach on Apr. 27, 1999, and he immediately put his stamp on the program as the Bulldogs more than doubled their Division I win total from the previous season and improved to fifth place in the Ivy League. In 2000-2001 the turnaround continued as Yale entered the final weekend of the regular season in the hunt for the Ivy League championship. The captain of the 2000-01 team, Neil Yanke, signed a free agent contract with the Los Angeles Lakers in 2004. Jones recruited Yanke to Yale as an assistant coach and then was his head coach for two years.

In 2001-02, Jones guided the Bulldogs to one of the most memorable seasons in school history. Yale finished 21-11 and earned a share of the Ivy title with Penn and Princeton. The Bulldogs upset Rutgers in the first round of the NIT before falling to Tennessee Tech at the New Haven Coliseum in front of the largest crowd ever to watch Yale Basketball in New Haven.

Sears, one of the most recent player to join the professional ranks, graduated as one of the most successful players in school history under Jones' tutelage. Sears is Yale's third all-time leading scorer with 1,700 points, is the only two-time Ivy League Player of the Year award winner in school history and is among the school's career leaders in points (3rd, 1,700), rebounds (4th, 818), blocks (2nd, 200) and free throws made (2nd, 475). In addition, he earned first team All-Ivy recognition in his sophomore, junior and senior seasons, becoming just the third three-time first team selection in school history and the first since Chris Dudley (1985-87). Sears was the recipient of the 2016 William Neely Mallory Award, the most prestigious athletic award given to a senior male at Yale.

Draughan, who graduated in 2005, enjoyed a long professional career, retiring in 2015. He finished seventh all-time at Yale in scoring with 1,413 points and second in steals and fifth in assists.

Mangano also made his mark at Yale under Jones. Mangano, a two-time first team All-Ivy selection, is Yale’s all-time leader with 213 career blocked shots. In addition, he was invited to the 2012 Portsmouth Invitational and played for Team USA at the 2011 World University Games in China.

One of Jones’ goals when he took the job was to upgrade Yale’s schedule, a promise he has delivered on. In 2013, nationally ranked Florida visited the John J. Lee Amphitheater. The Bulldogs also have hosted Stanford (2008), Wake Forest (2003) and Penn State (2001) during his tenure. In addition, Yale has played in numerous prestigious tournaments under Jones, including the preseason NIT, the Coaches vs. Cancer Classic and the inaugural Guardians Classic.

Jones has gained experience with USA Basketball in his time at Yale as well. He served as an assistant coach to Villanova’s Jay Wright for the 2007 USA Basketball Men’s Pan American Games Team, helping tutor Georgetown’s Roy Hibbert, Michigan State’s Drew Neitzel and Indiana’s D.J. White. In 2006, Jones was selected by the USA Basketball Men’s Collegiate Committee, chaired by Syracuse’s Jim Boeheim, as a court coach for the 2006 USA Men’s U18 National Team Trials.

Jones also has shared his insight with college basketball fans, serving as a guest analyst on the CBS College Sports Television Network on numerous occasions.

In addition to his coaching duties, Jones has been active in the New Haven community. Each summer he runs the James Jones Bulldog Basketball Camp. In 2002 he was the recipient of the President’s Award from the Greater New Haven NAACP at its 85th Freedom Fund dinner, and in 2019 he was presented with the Polly Sweeten Excellence in Sports Award from the New Haven Farnam Center.

As an assistant coach at Yale for two seasons from 1995-97, Jones gained a great understanding of Ivy League basketball. He returned to Yale as head coach after two years as an assistant coach at Ohio University, where he was primarily responsible for coordinating the Bobcats’ recruiting efforts and developing the post players. In 1998-99 he helped guide Ohio to an 18-10 overall record and a berth in the Mid American Conference Tournament semifinals. At Ohio, he recruited Brandon Hunter, who was a second round pick of the Boston Celtics in the 2002 NBA draft.

A Long Island, N.Y., native, Jones served as an assistant basketball coach for five seasons (1990-95) at his alma mater, the University at Albany (N.Y.). In his final two coaching seasons at Albany, he helped lead the team to a 44-11 record and two appearances in the NCAA Tournament, including reaching the Elite Eight in 1993-94. His primary responsibilities included recruiting, scouting, supervising the fall conditioning program and advising team members on academic matters. The team was 93-40 during his five seasons on the bench.

Jones graduated from Albany in 1986 with a bachelor’s degree in communications and in 1995 earned his master’s in educational administration. As a player at Albany, Jones was captain of the freshman team and was selected as the team’s Freshman of the Year. He played for and coached with the legendary Dr. Richard Sauers, one of only seven collegiate coaches to win more than 700 games.

Jones is an active member of several organizations, including the National Association of Basketball Coaches.

Before entering the coaching profession, Jones served as an executive account manager at NCR Corporation in Albany, N.Y., where he managed a $1.5 million sales territory.